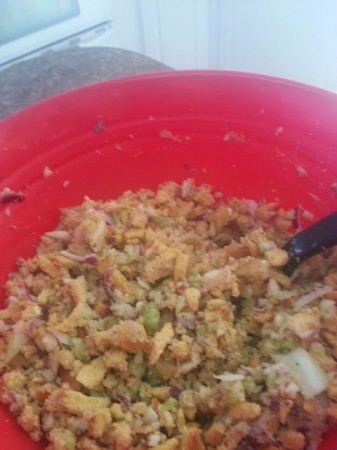 Christmas morning. … Turkey is brining, new, space age Super Wave Oven ready on the counter.   Now what?
Potatoes?   Cranberries?  Waldorf salad?  No.   Stuffing.   Oh,  you mean dressing?  No,  stuffing.  Same concept up until the baking.   I love mine the old fashioned way-stuffed inside the bird while it roasts,  absorbing all those juices and adding touches of flavor to the bird.

But it’s not safe someone will scream.   Sure it is,  but you have to roast it long enough is all.   If you’ve slow roasted your bird to perfection,  your stuffing will be cooked all the way through.

Fortunately,  thanks to Bountiful Baskets I have just about everything already in my fridge.

P.S. ~  I served this to a friend who doesn’t like stuffing at all.  He took a small spoonful out of courtesy.  He wound up eating more than half the stuffing by himself.  I’d say that equals success at the dinner table!