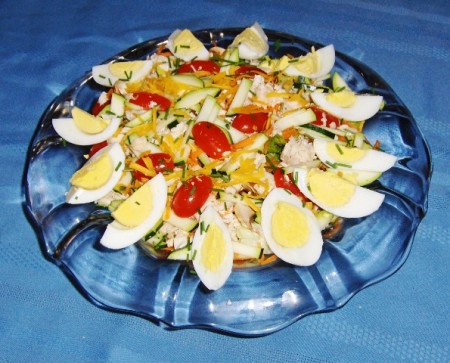 Ever wonder what to do with your produce from the last basket a few days before the new basket is coming. I do a end of the basket salad. Never the same twice but it is always fantastic. I am surprised how creative some of them can be. Change them up with your own favorite dressing and enjoy! END_OF_DOCUMENT_TOKEN_TO_BE_REPLACED

Spaghetti squash is a very versatile vegetable.  It can be used as a nutritious substitute for any pasta.  For our family weekend barbecue, I decided to make a pasta salad.  I used spaghetti squash as the pasta in my recipe for Asian Salad.  It was a family favorite! 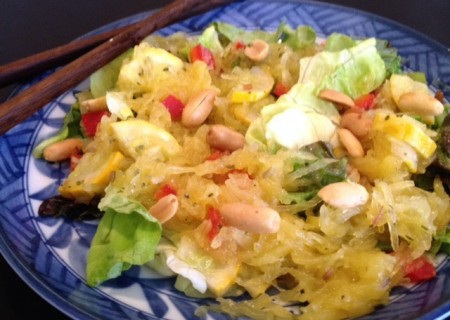 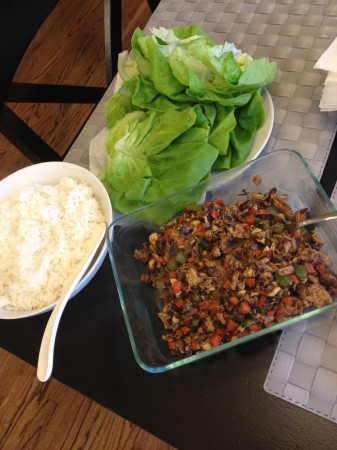 Anyone who has received butter lettuce in their Bountiful Basket knows that it can be a little unsettling to put something that claims to be “alive” and comes with a dirty root ball into your refrigerator. We also know that it’s delicious. Both times I’ve gotten it, I knew I could’ve probably just made a salad, but the perfectly cupped-shaped leaves made my mind automatically think lettuce wraps. END_OF_DOCUMENT_TOKEN_TO_BE_REPLACED 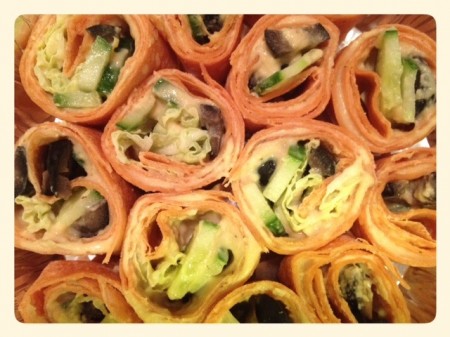 I love using hummus in wraps!  Spreading hummus on the spinach or herb wraps makes a tasty base for any add ons.  You can add turkey or ham slices or just make them veggie.  I like to spread on the hummus and add chopped black olives.  You can be inventive and add your own ingredients to these!  Enjoy!
END_OF_DOCUMENT_TOKEN_TO_BE_REPLACED 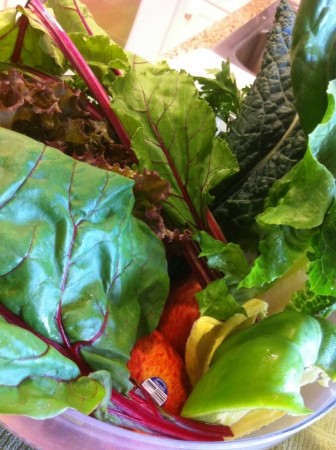 Green juice does not have to be scary! My mind tends to see green and go straight to yuck, but the trick is to add an extra organic green apple or make it red by adding an organic beet, leaves too! Try to limit the beet and apple… while it will sweeten your juice, remember there is sugar in sugar in there. Green juices detoxify, give you iron and magnesium when you use kale, chard and dark leafy greens.
END_OF_DOCUMENT_TOKEN_TO_BE_REPLACED 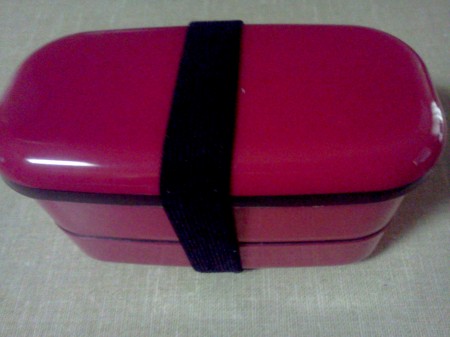 Now that school has started I’m back to making lunches for the kids because let’s face it cafeteria food is…well cafeteria food!  My children have never been picky eaters because we’ve never dumbed down their food.  What we eat they eat!  This ol’ gal doesn’t do multiple meals.  Because of that our kids are much more open to trying things most of their contemporaries won’t touch and quite honestly it makes my life much easier.  I do have to be honest with you though.  Our food philosophy has created borderline food snobs, but hey, worse things could happen ya know?!
END_OF_DOCUMENT_TOKEN_TO_BE_REPLACED

Though it’s no new discovery that vegetables are beneficial to ones health, did you know that greens, when eaten regulartly will improve your health.   Greens are filled with fiber, vitamins, minerals, and plant-based substances all of which play an important role in the maintenance and well being of your body.   Without a doubt the fastest and easiest way to incorporate greens into our diets is by way of the salad.  Now most people when they think of salad they think of the basics:  ice berg lettuce, tomatoes, maybe a few slices of purple onion and a crouton or two.  What they don’t realize is that there not only are some greens not actually green but there are dozens of varieties to choose from.  Here we’ll go over some of the most commonly used and their care.

Lettuces are one of the oldest vegetables known to man.  They are grown and sold worldwide and are members of the genus Lactuca.  The most common of the lettuce families are butterhead, crisp head, leafy, and romaine.

The most common of the butterhead variety, Boston and Bibb posses soft leaves and feature a buttery texture and flavor.  Boston is larger than bibb but both for cuts and are excellent choices to be used in making lettuce wraps.

The most common of all lettuces, iceberg falls under the crisp head category.   It possess a mild flavor, remains crisp for long periods of time and lends itself well to hearty dressings.

Distinguishable by it’s separate ruffle edge leaves, leaf lettuce is not a firm head.  It’s rather delicate, therefore, can be easily damaged.  Leaf lettuce can be found in both red and green varieties and are known for their mild flavor and tender leaves.

I like to call Romaine the backbone of all the lettuce family.  It’s hearty, flavorful, and versatile.  Romaine is a loosely packed head with long leaves and thick ribs.  The outside leaves are dark and you will see a noticeable fading as you get into the center of the head, or the “heart” of the romaine.

Though not new in the culinary world, living lettuce is finally making it’s way to dinner tables across the United States.  Living lettuce is grown hydroponic and sold with the root system in tact.  if you happen to have a green thumb you can maintain the lettuce for quite awhile if you just pull off leaves as needed.  The most commonly used living lettuce varieties are butter and bibb but if you look around you can also find  arugula, green leaf lettuce, red leaf lettuce, Boston lettuce and watercress.

The most common and easiest to find are nasturtiums, calendulas, and pansies.  They are often used in salads or as garnish.

****Be mindful to ONLY use edible, pesticide free blossoms.***

When most people think of spinach they see visions of Popeye and the overcooked spinach that he always ate.  Truth be told, spinach is terribly under appreciated but incredibly versatile.  Whether tossed in a salad, sauteed with bacon or added to stuffing, spinach possesses a rich flavor and tender bite.

A mixture of a variety of baby greens that posse very subtle flavors much less bitter than their more mature counterparts.

Sometimes known as rocket arugula is actually a member of the cabbage family.  It’s strong spicy flavor lends itself best to salad mixes when eaten raw but can be quite delightful when sauted.

A member of the chicory family, endive can be found in a a couple of varieties, Belgian and curly.  Belgian is the shoot of the chicory root.  The leaves are normally seperated and filled though whole heads can also be grilled or braised.

Delicate leaves on hearty stems, watercress has a very peppery flavor and can be tossed into salads, added to cream cheese, soups and most savory dishes what do not require extended cooking times.

Most commonly identified by it’s large ruffled/curly leaves kale possess a bitter flavor that goes well with rich foods but is a nice accent to salads and soups and can sometimes be found in it’s ornamental variety (also known as Savoy).

Somewhat tart and almost spinach like, chard is essentially a type of beet that does not produce a root.  It can be steamed, sauteed or used in soups and salads.

Please keep in mind that all salad greens are highly perishable and need to be handled properly in order to maintain a reasonable shelf life.  Soft leaved varieties tend to perish more quickly than their heartier leaved counterparts.  Do not store greens with tomatoes, apples or other fruits that emit ethylene gas as it will accelerate spoilage.  All greens should be vinegar washed after they are torn and  prior to using.  Drain thouroughly either in a colander or a salad spinner as wet greens do not stay crisp, they do not hold dressing, and they will go bad much more quickly than dried leaves.  Once dried store in an airtight container.

Don’t forget to eat your greens!

A couple that I know just celebrated their 60th wedding anniversary. The key to their success? Well, according to the husband their happy marriage is all because his wife has packed him his lunch every work day for their whole married life. At first, this revelation made me feel really…guilty. I can honestly say that in 13 years of marriage I have never sent my husband off to work with a homemade lunch. Sure, this has meant he has some extra candy machine visits or drive-through stops, but how can I squeeze in making lunch for a man who leaves the house at 5:45 each morning? Already I have a house to clean, meals to cook, four kids to home-school, and sometime in there I have to get a shower (really, won’t he appreciate a clean wife more than lunch?) The old man’s marriage advice was fresh in my mind when I saw pictures of layered, jarred salads on the Bountiful Basket’s Facebook page. These seemed healthy, fresh, and most importantly easy. And so, in an effort to keep our happy marriage happy, and armed with an arsenal of salad-in-a-jar recipes, I have decided to try packing lunches this year.
END_OF_DOCUMENT_TOKEN_TO_BE_REPLACED