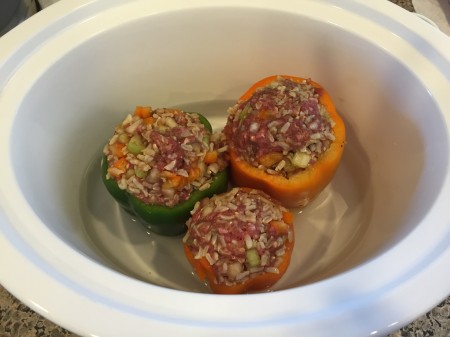 I can use one or two peppers in a week, but 6, that’s a little more tricky. When BB gives me an abundance of bell peppers, stuffed peppers are really the only option. So it was, slated for tonight’s dinner on the ol’ meal plan. We had already had several tomato-based dinners this week (chili–which we ate twice, spaghetti squash spaghetti, and pizza), so I thought I’d give my husband’s heartburn a break and make stuffed peppers flavored with soy sauce, brown sugar, and ginger instead of tomato paste, borrowing flavors from my favorite halloween meal, dinner in a pumpkin. It was actually pretty tasty and healthy too!

I have a small family and don't like leftovers, so I only made enough to feed myself, my husband, and our two small children. If you have a larger family, you would be wise to double the amounts.

One thought on “Asian Inspired Stuffed Peppers–In the crockpot”