Admit it you love a crunchy, salty, sweet, and spicy snack.  Guess what?  ME TOO!!  And one of my all time faves is the fabulous NACHO.  A crisp corn tortilla chip topped with all the sassy southwest flavors it can handle has been my answer to many a Saturday night junk food craving.  I’ve felt that my culinary creativity comes through as I mix up the toppings, and trade out salsas and sauces.  But, when my Super Asian Pack box arrived I realized my creativity has been limited.  Why keep the nacho stuck in the America’s?  I gave that dish a face lift that sent it to the Far East.  And the results were completely irresistible.

I started by cutting the Won Tons from the pack into triangle-shaped quarters.  Then, I fried them in coconut oil.  Coconut oil is such a great oil for frying.  It does well at high temperatures and gives a light crispiness that doesn’t feel fatty or heavy.  These Won Ton chips cooked up light, crispy, and a beautiful golden brown.  They had a hint of sweetness from the coconut oil, and had a nice flavor contrast to the toppings.  This recipe could be made with regular corn chips or, in the case of the grain-free eaters in my home, sweet potato chips.  (Remember, the Won Ton wrappers are delicious but NOT Gluten-Free)

After the chips were fried, dried, and salted I topped them with some shredded Monterey Jack cheese and melted that down in the oven.   I was a bit concerned about the authenticity of cheese on Asian nachos.  But my husband, who spent the summer in China, assured me that they do eat cheese, and reminded me that there is in fact nothing authentic about Asian Nachos so I should just do what tastes good!   After the cheese was melted I topped the chips with finely chopped Napa Cabbage and my fabulous Won Ton filling (it made a LOT so I had plenty leftover).  Then, I proceeded to decorate that nachos- I topped with green onion, shredded carrot, shredded ginger, and drizzles of my Blackberry Asian Dipping Sauce.  The finished product was beautiful and delicious.  We decided it needed a bit more heat though.  So, on our second batch (ahem…they were good…don’t judge) I used pepper-jack cheese and added avocado and spicy peppers to the toppings.  Those flavors mixed with the sweet blackberry sauce and really brought the dish together.  Can’t wait to get more chips and another box of Asian goodness so I my can whip up a platter of Asian Nachos. 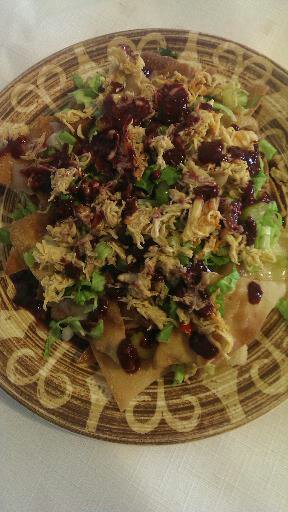