The tropical pack is one of my favorites. I open it and the smell immediately transports me to far off beaches filled with refreshing flavors and cool breezes. I will admit though, it is also one of the most intimidating packs for me. Each item seems like it takes special knowledge and intense preparation. In my house, the coconut has often gone to waste (let’s share a moment of silence for the untimely loss of a coconut). The pineapple, kiwi, and mango generally end up tossed in a smoothie (yum- but snore). And the rest of the stuff usually gets incorporated into my weekly meals ending up in a less-than-tropical-flavor. I don’t know about you but using the tropical pack limes to make Southwest Ranch Dressing just seems wrong (although the dressing is SO good- but that’s for a different post).

So, when the tropical pack came around again I resolved within myself to use up the bounty to create tropical flavors that would WOW my family and transport them to paradise- you know, since the tropical pack is way cheaper than plane tickets for 6. Well, I have succeeded. I will admit I did not use everything in this one recipe, but I got a good amount in. And most importantly I did not bring another poor coconut to a wasted end. After looking over several different recipes and tossing in a few of my own ideas, my Tropical Cream Cake was a surprising hit. Why surprising? While cake is generally a hit no matter how it is presented (I will withhold comment on the grocery store cake industry) cake at my house is a bit of a challenge. Two of us eat grain-free and when I make a family treat I try to make it something that we can all enjoy. My husband has gotten used to coconut flour, garbanzo bean flour, and other “special” ingredients in his desserts. He is generally a good sport about it, but when he heard I was making a “Tropical Cream Cake” his true feelings came through. “Oh, that totally works- everything with coconut flour tastes like sand- it will be just like eating cake on the beach”. The shameless mocking digressed from there as he enlisted the help of the children in his “coconut flour is sand” tirade. I will spare you the details but just know I have decided that my family is at its absolute happiest when making fun of me. With this newly-voiced skepticism ringing in my ears, I set about to make the best cream cake the family had ever tasted. I will admit that while exuding outward confidence I was seriously questioning the concoction I was about to whip up. Oh me of little faith. This cake was in fact so good that hubby (and his minions) could find no flaw. In fact he went for seconds and had it for breakfast the next day!

The nice thing about this cake is its flexibility. You can make it as simple or as complicated as you want and there is some room to play with flavors and ingredients. Using these instructions, I cooked and shred my own coconut (you know- use up the pack), but you could just as easily use bagged coconut.  I scraped all the beautiful little black specks from my fabulous vanilla bean, but vanilla extract would work nicely. I chose to use the pineapple but mango or kiwi bits (or a combination) would be fun to try. I cut my pineapple into chunks and pulsed a bit in the food processor to make a cup of crushed pineapple, but canned is fine (whatever you use, be sure to drain the crushed pineapple well). I chose to drizzle it with a thin raspberry jelly but it would taste great plain or with a bit of whipped cream.  This very moist cake sets up a bit after it’s cooled, but tastes fabulous still warm. One of my daughters is allergic to pineapple so I made her a mini cake without and it was still delicious and had a truer cake consistency. The recipe can easily be adjusted to work with most diets. I am excited to have a healthy(ish) grain-free dessert delicious enough to serve to friends, yummy enough to stop my husband’s mocking (only because his mouth was full and he has impeccable table manners), and versatile enough to use up that fabulous Tropical Pack. I hope you grab a pack, roast a coconut, and let this Tropical Cream Cake carry you away to culinary paradise!

Print
A Visit to the Tropics…Via Cake! 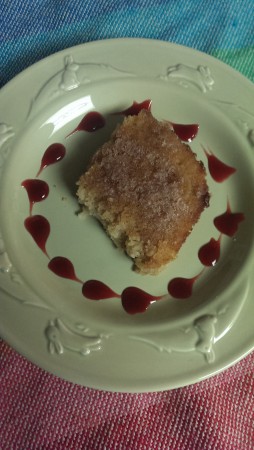