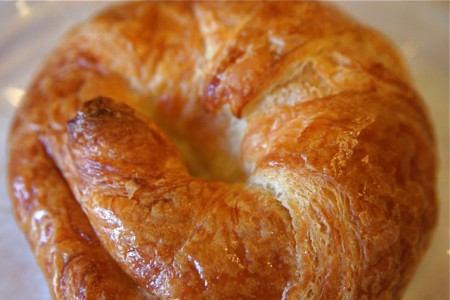 I have never been impressed with pears. I thought they were mush….like baby food. Well if you have store bought packaged pears, they are! A fresh pear with a dab of yogurt and bountiful baskets granola is a wonderful breakfast, afternoon snack, or quick dinner if you forgot dinner before an activity. I simply peel a pear and slice then devour it!

Once I got over my avoidance of pears raw, I moved on to canning fresh pears. I messed the first batch up because I thought I had to boil them and hence they became pear sauce, like applesauce with no flavor. 🙁

I decided that while I did want to have fresh pears year round I was not going to be able to stomach the canned version that way. I then thought about freezing pears like I do my peaches… in a natural juice and fresh freezing them. I have been successful with this method for pear croissants (below) and sprinkled with cinnamon, but these are still not as good fresh out of the bag.

I prefer to serve these warm with a scoop of yogurt or Ice cream (depending on the time of day). I have tried to substitute dairy free and egg free in this recipe and it does not proof the same.....but texture wise I did not feel it was different. I just don't let my allergy kiddo to have these:).