I often try to get creative with the BB veggie packs- you know, use the juice pack for anything BUT juice, the lunch box pack ALL for desserts. Apparently, I’m just a BB rebel. So all week long I was anticipating my beautiful stew pack and thinking of (i.e. pinning) all the creative things I would do with it. But on distribution day dark clouds and cool temps rolled into the Vegas Valley and thoughts of rebellion floated away. The only thing on my mind was in fact, stew. I decided it would be fun to use my stew pack ingredients to make my first batch of pressure canned stew. I got my stew pack home and started washing, peeling, and chopping. Now, my husband must have a similar rebellious streak because he walked past, looked at my work and said “I don’t think that should be a stew pack. I think it should be a breakfast skillet pack and we should use it up right now”. I quickly informed him that my heart was set on pressure canning stew and he could just go fill up on some of the BB fruit covering the counter. He reluctantly walked off munching blackberries (ok he wasn’t too reluctant about that) and grumbling about too much stew. Believe me a few hours later he changed his tune.

I peeled and chopped 5 lbs of potatoes, 1 lb of carrots, whole head of celery, one large onion, and 4 cloves of garlic. I used the fresh bay and parsley to flavor my cooking liquid and wrapped the kale up so I have it to add in fresh when I serve the stew (unless it becomes kale chips before that, which is entirely probable). The pack also came with 6 hatch peppers which I roasted, peeled, and froze for later. All of the ingredients from the stew pack, plus about 4 pounds of beef, got me the equivalent of 8 quarts of stew. Six I pressure canned and two were put into the crock pot for Sunday dinner. The total cost for the ingredients (stew pack, meat, broth) came to $17.96 for a grand total of $2.24 per quart (not including cost of lids and jars which I had on hand). I don’t know the going rate for commercial canned stew, but I would consider this a pretty good price for quality, easy-to-grab meals.

While I was chopping I simmered 8 cups of beef broth, 3 cups of water, 2 of the fresh bay leaves, half the bunch of parsley, and the leafy, inner ribs of the celery in a very large stock pot. When I was done chopping the veggies I cubed the meat and browned it in a large pot. Pressure canning is safest with very little fat so I do not use oil to brown meats unless I have to. I find that if I keep stirring, the meat generally lets off enough liquid to brown without sticking- this time I did not need to add any additional oil. Once the meat was browned I removed the celery leaves, bay leaves, and parsley from the broth, and added in the veggies and meat. I brought that to a boil for just a minute. The veggies and meat completely cook during processing- I just needed them hot. Then I filled my hot jars with the veggies and meat to about 2 inch headspace. I then used the cooking liquid to fill the jars to 1 inch headspace. I bubbled the jars, added more liquid where necessary, wiped the rims with a paper towel dipped in white vinegar (to help remove any fat or particles) put on a warm lid and popped those babies into the PC’er. For my elevation I processed for 90 minutes at 15 lbs of pressure (using a weighted gauge).

When I opened the canner I was pleased to find 6 jars of tender, fully cooked stew meat and veggies in a lovely, light broth. As no thickeners can safely be used in home canning I will need to thicken up to stew consistency (Or just add a bit of broth and serve up veggie beef soup). There are two ways to thicken the stew. First, is to bring to a boil adding liquid if needed and then stir in some cornstarch to thicken. (BTW this way would be great for beef pot pie) The other way is to make a gravy using flour (we do sorghum for gluten-free), butter, and broth. Then stir the stewed veggies into the gravy adding broth until the right consistency. This way makes a hearty stew- which is how my family prefers it.

I always try to be very careful with my pressure canning recipes. I try to find reputable sources and closely watch pressure levels and timing. If you want to pressure can your stew pack (or anything else for that matter) I suggest you follow these instructions from my most trusted source SB Canning. Remember- Vegetables and meats are low acid foods and must be pressure canned.

Even though I did not get rebellious and turn my stew pack into a breakfast skillet pack, hubby has been thrilled with the results and so have I. Maybe next time I’ll get creative. But this was so easy and SO yummy, I may just find myself sticking to stew. Happy Cooking! 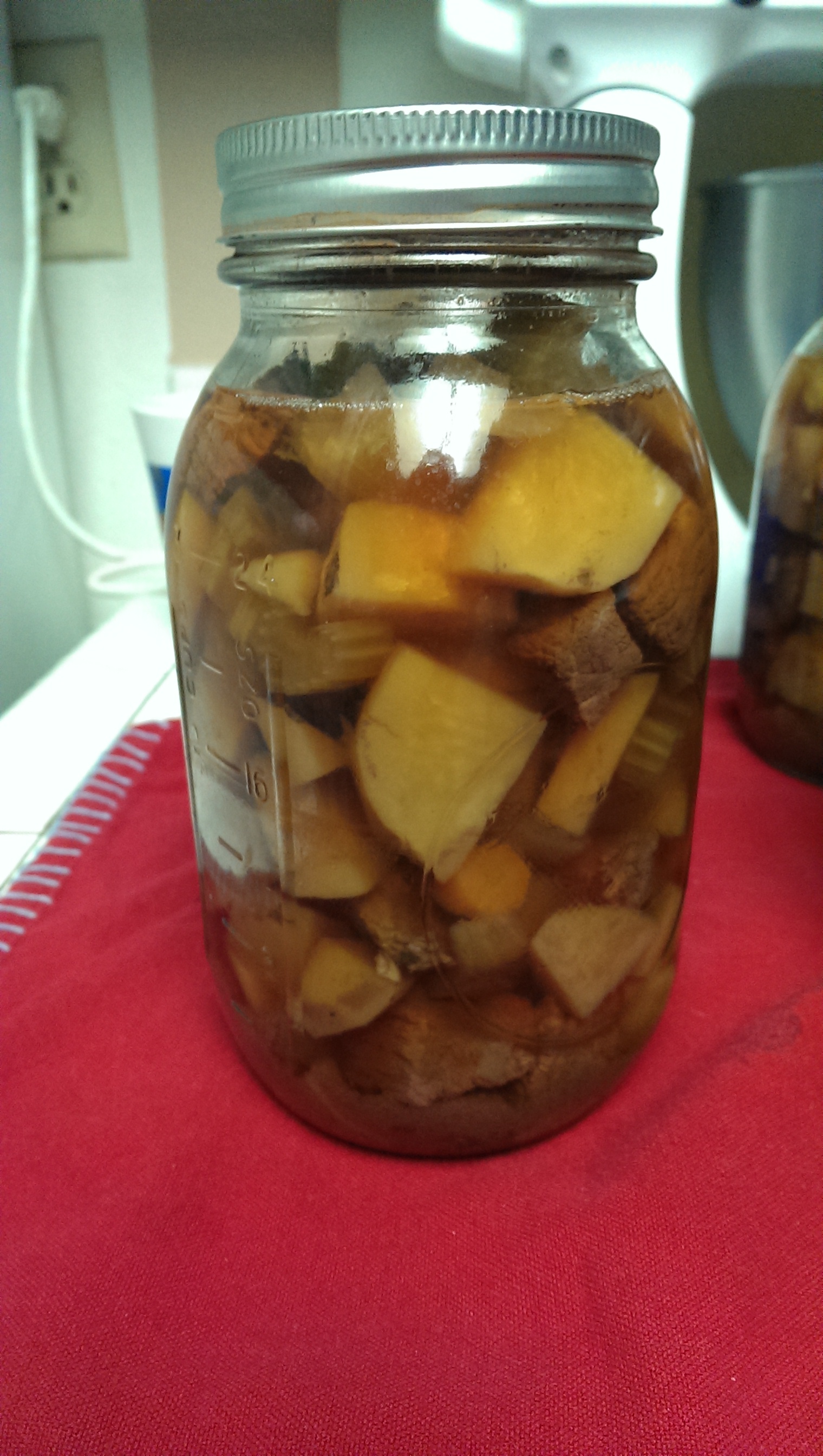