In the last few weeks we have received lots of Hatch chile peppers in our baskets as well as the 25 lb. case add on. There have also been red and green bell peppers for those who contributed for the fajita pack add on.  The question I have heard over and over again is, “How do I roast these peppers?”

As with all the produce we get; wash them in a 10:1 vinegar bath, rinse and let them air dry.  While you are waiting you can fire up your outside grill, or line your baking sheets if you are roasting them under the broiler (be sure that the rack is on the 2nd level so we don’t over roast the peppers).  I prefer the broiler.  Place the peppers on the baking sheet;  put the pan in the oven.

It will take a few minutes, and it might get a little smoky, but you will start to see the skins char.

Using tongs turn the peppers over and return to broiler.  When they have roasted on both sides remove the pan and place on a heatproof surface. 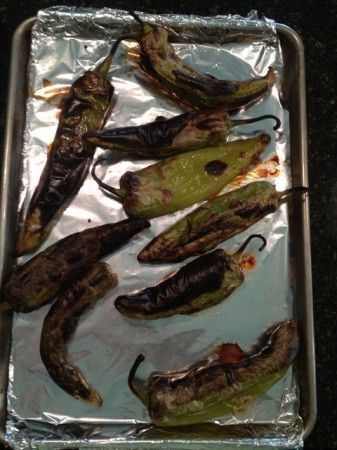 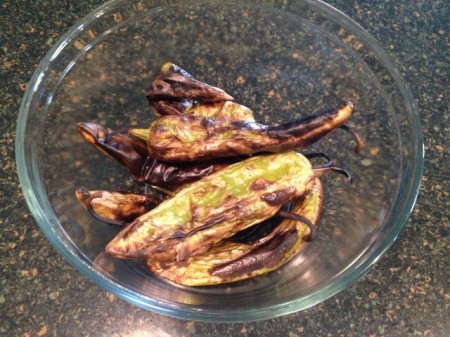 and cover with plastic wrap and let them steam.

Once they have cooled for 30 -45 minutes, remove the plastic.

You many want to put on gloves to protect your hands from the pepper oil, even though these peppers are mild they have a tendency to burn a bit.  Over the cooled baking sheet, gently pull the skin from the peppers,and remove the seeds.

From this point they can be pressure canned, or frozen either whole or chopped.  Follow the same steps for grill except place the peppers directly on a clean grill.  Now see that wasn’t too scary!