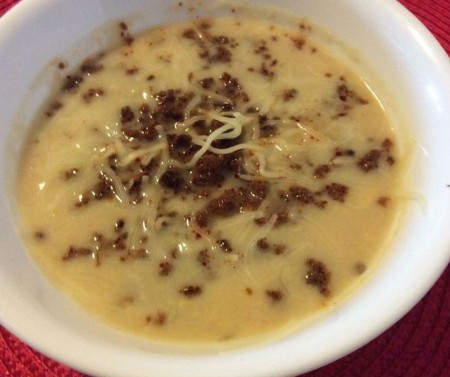 Yes, I did just describe this cauliflower soup as killer. That isn’t just a dramatic attempt to convince you to check out this blog post, this recipe turned out SO scrumptious.

Here in Texas it is Hatch Chile time. Don’t get me wrong, we love all of our chiles as much as we love to complain about summer weather but a magical chile event happens in August. Grocery stores start to roll out roasters and haul in tons of hatch chiles from our friends in New Mexico. While they are plentiful, I buy up as many cases as I can (read that as too many). As a result of my hatch chile gluttony, I preserve them and put them in everything that I can dream up. This “killer” cauliflower recipe is one such creation.

I also used a little chorizo in this recipe. I love the way chorizo tastes but find that it can overpower other flavors so I used it as a garnish on top of my soup. This was a nice balance where I got the chorizo taste but the other flavors came through.