I absolutely love the way Indian corn looks – it’s colorful, shiny kernels make it excellent for decorating during fall nestled with some funky gourds and cute mini pumpkins. Only recently I found out that some of it is food grade (though some is not because it is treated to only be used as decorations). I was eager to pop some with my daughter. We tried it three ways – on the stovetop, in the microwave and in our popcorn popper.

To prepare the corn for popping, I removed the kernels from one of my ears of Indian corn. It was tedious work but came off easily by applying pressure with my fingers. 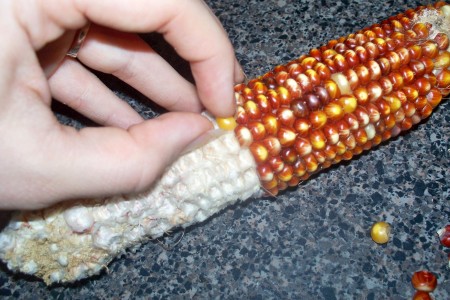 I put the removed kernels into a strainer then rinsed them and dried thoroughly with a towel. 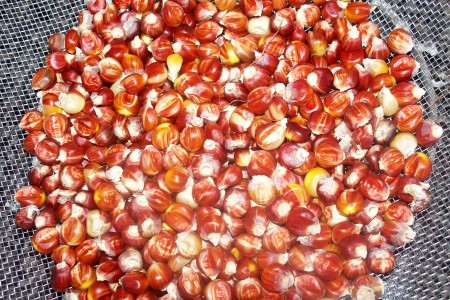 Onto the popping – I tried out a variety of ways and actually found that I liked the microwave the best. It was super easy and oil free but all three methods produced yummy popcorn.

Stovetop: Coat the bottom of the pot in a little oil (I used peanut oil) and set the stove on med-high. I let the oil get warm for a while then put a test kernel into the pot. Once my test kernel popped, I put a handful of kernels in and covered the pan. I shook the pan while it popped. Once the popping had really slowed down, I dumped it into a bowl.

Popcorn Popper: Just put a little oil in your popper, add the kernels and let it whirl. Again, once the popping slows, I dumped the popcorn into a bowl. 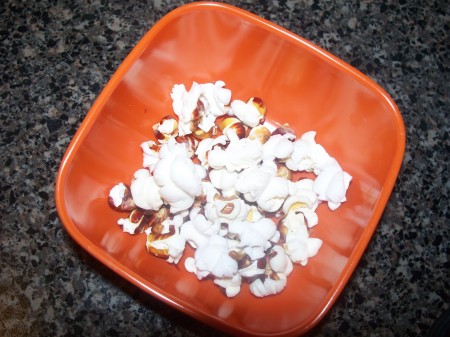 A variety of toppings are yummy on the popped Indian corn – melted butter, parmesan cheese, nutritional yeast, cumin, hot sauce, chili seasoning, cinnamon and sugar… I could go on and on.

So once you are done enjoying your Indian corn as a decoration, enjoy it popped and get creative with some toppings.