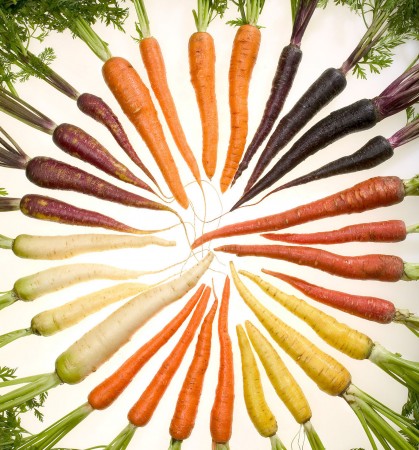 The carrots that lent a great pop of color to the veggie baskets today are no modern innovation.  In fact, the original color of the carrot was deep purple- not the orange we all expect.  The orange carrot that we know and love is actually the result of a royal whim.  Yes, generations ago when Holland was the lead distributor of carrots, King William of Orange was fighting for his nation’s independence.  Having never been very fond of the color purple, and in an attempt to increase national pride, the King instructed the royal carrot breeders (apparently that was a pretty important job back then) to breed the purple OUT and increase the orange shades.  As the new orange-only carrots were shipped around the world consumers (particularly the Europeans) took quite a fancy to them and orange became the color of choice.

Today, modern growers recognize the increased health benefits and heirloom varieties of carrots including purples, whites, reds, are easier to find.  These “Rainbow Carrots” are packed full of antioxidants, vitamins, and fiber.  The colored carrots have similar (many would say identical) flavor and texture to the standard orange and can be used in exactly the same way.  Of course, if you are looking for something to really make that color stand out, you can always try this recipe for purple carrot cake.